Why is the FSL going up in Victoria

The single most asked question of me regarding the Fire Service Levy (“FSL”) tax in Victoria stems from a series of letters to the editor by sitting members of the current Victorian Parliament to newspapers across the state.

These letters are in reply to a large number of letters to the papers, often, but not necessarily by those in the insurance industry complaining about the high level of insurance taxes. An example of one in the Farmer's Weekly is included below:

The statement in a politician’s letter reads:

The 2012-13 Budget shows a reduction in the cost of fire services and insurance companies would be expected to reflect this in premium notices. Insurers, and not the Government, are responsible for setting the FSL rate applicable to premiums. Insurance holders are therefore advised to shop around and compare policies, examining the total cost of the policy as well as the specific FSL component."

The question to me invariably reads:

Is the comment relating to the FSL Budget being lower for 2012-13 true? If this is correct, why then have Insurers raised FSL rates through the roof?"

There are in fact two reasons.

At the start of the 2011-2012 Financial Year, the insurance industry was advised that the amount to be collected for the period was to be $544.2 million. At the end of the period, the amount had been increased by nearly $100 million to $641.9 million.

To my way of thinking, the claim that the levy has gone down is worse that mere political spin, it is simply untrue.

Insurers that were caught short (and I understand many were) in their collections in the 2011 – 2012 Financial Year will have to make up the shortfall out of net profit
or by charging a bit more this year to make it up. I am sure that I am doing the insurance industry a grave disservice in suggesting this and have no evidence whatsoever that this is in their thinking. But what I would suggest is that “once bitten, twice shy” and that having the Fire Service Levy increase by nearly $100 million above the forecast in one year means that insurers will not be caught by such an increase a second time.

Let us park the alleged saving for a minute. The 2010-2011 published accounts of the Country Fire Authority (Victoria) shows accumulated surpluses of $325,187,000. This figure will be higher for the 2011-2012 financial year. The latest Metropolitan Fire Brigade results that I have are for the period 2009-2010. They show accumulated $201,502,000. The huge amount of surplus has been achieved primarily due to those who insure their home or business through the local insurance industry being asked to fund the full amount of capital expenditure in the year that the expenditure is incurred.

Even though the CFA and MFB have more than $½ billion in reserves, much of it in cash and other investments earning interest, the Victorian Government still wants those that insure in this alleged “transition” year to pay for all the capital expenditure that will be incurred during the 2012-2013 financial year despite the fact that the expenditure will benefit all Victorian well beyond this financial year. This on top of the operating costs is just plain greedy.

Based on past experience, you do not have to be Albert Einstein to know where the money will go. Once the tax is off insurance and the CFA and MFB are making even more money through the levies on property rates, what will happen is that a “dividend” will be called for by the Victorian Government at a future State Budget just as they did with WorkCover in this year's State Budget. ($471.1 million over 4 years!). Like the FSL, this rip off of WorkCover money is a hidden tax on Victorians.

I wish the State Government and their politicians would just be honest. It is a greedy State Tax which causes home and business owners to under insure or worse still not insure at all!

The fairest way to do this is along the line of the following graph: 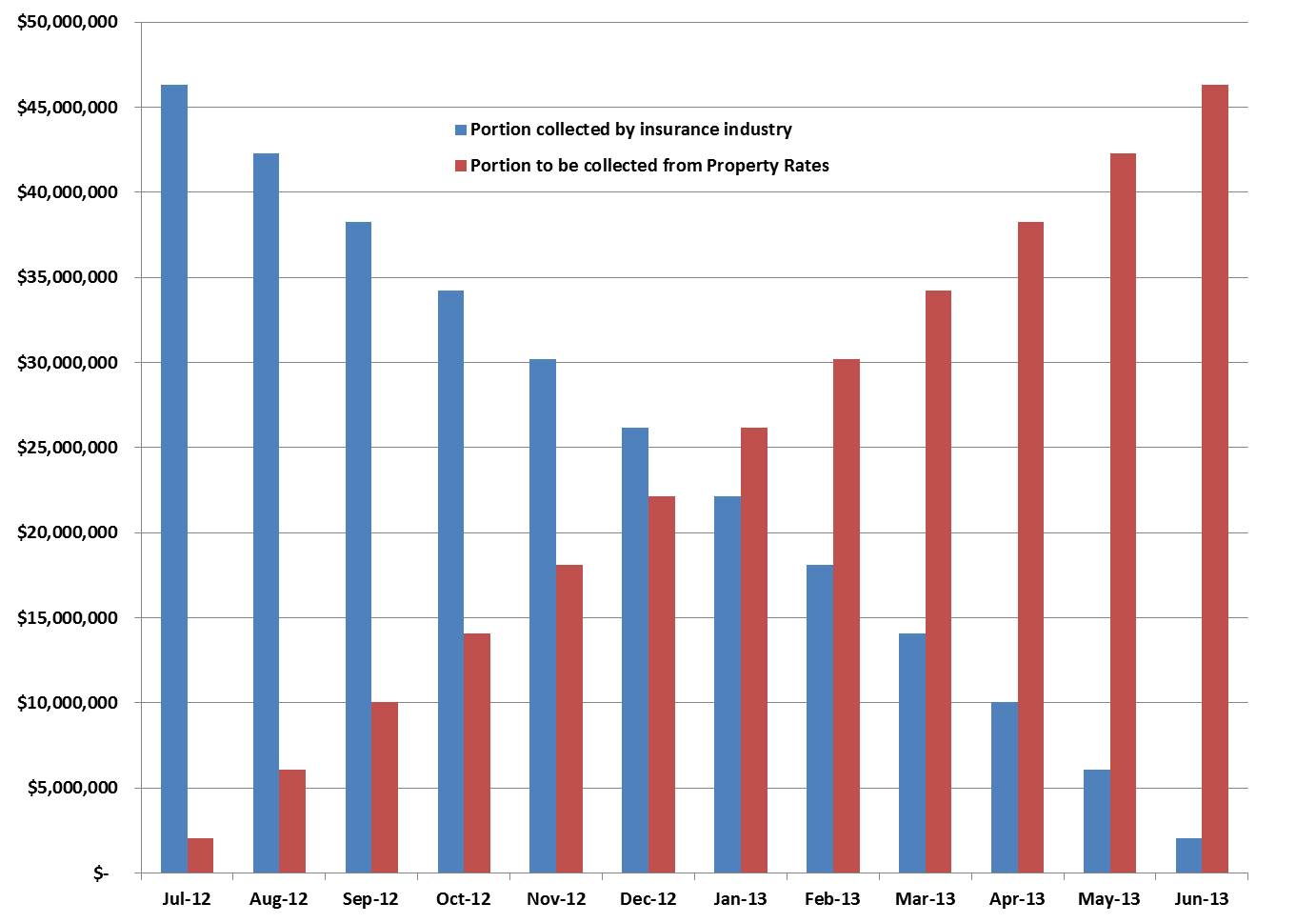 Simplistic Graph of fair transition of FSL from insurance to property rates over one year.

The Victorian Government’s idea of transition is to impose the full amount of $580,000,000 assuming it stays at this level until 30 June 2013 and then move in one hit to property rates. That is the insurance industry has to collect the equivalent of $48,333,333 for each of the 12 months during the current financial year.

The flaw in basic logic that only an idiot could diliberately overlook is that both insurance and property rates are paid in advance not arrears. Let us say a person’s insurance falls due on 1 April 2013. They will be charged the FSL plus the compounding taxes of GST and State Government Stamp Duty at their renewal. But then as from 1 July 2013, the same home or business owner will also be charged FSL on their quarterly property rates. This means that for 9 months the insured in this example is paying the same tax twice! (From 1 July 2013 to 31st March 2014). For a home owner living in rural Victoria paying $1,000 base premium on their house and contents this equates to paying $579.95 of tax a second time. For a farmer or business owner in rural or regional Victoria it is $1,019.62 charged twice.

It does hurt those in the city as well but at $411.59 double tax on a $1,000 base premium on house and contents and $632.54 on a business it is much less than on those in the bush! How Mr Peter Ryan MLA and his National Party colleagues in Parliament could let this happen is beyond my comprehension. To me they have betrayed the very people they were elected by.

To further complicate the problem the Victorian Government announced their inappropriately named “transition year” started on 1 July 2013 but then went off on their Winter Recess without passing the legislation. More than one person has been heard asking: "what sort of 3rd world government do we have in Victoria?"

What is so frustrating is that the government have had year’s to work out a smooth equitable transition and have had the example of three other states to follow. The question is: is this another example of government incompetence or is it just a carefully staged grab for cash at the people of Victoria’s expense with the insurance industry left to take the blame?

We must not forget that the insurance industry is a conservative one. Measuring and pricing risk is what it does. Without the industry knowing exactly what the legislation is going to say and knowing with 100% certainty what the amount to be collected is, then they have had to price to the worst case scenario.

What I believe will happen is that the Insurers will carefully monitor the collections of FSL tax they make and as we get closer to the end of the 2012 – 2013 financial year, the FSL will fall so that those with only a few months to go will not be penalised too much. If on the other hand, there is no certainty and there is a whiff that the FSL tax on insurance is going to be higher than forecast the FSL will stay at it currently world record rates, particularly for regional and rural Victoria. Rather than repeat the rates here
and make myself sicker than I already feel when I look at them, I would refer you to http://www.allanmanning.com/?p=1216

I end this part of the post with a graph showing the current rates payable in Victoria compared to the rest of Australia and the world.

Victorians pay the highest level of insurance taxes in the world by a long long way! Source: www.NoTaxOnInsurance.com.au

The whole subject of FSL and taxes on insurance is not easy and that is why governments have got away with it for so long. I hope this explanation is detailed enough to explain the major points. What should be clear is that while the government may try and blame the insurance industry, this is totally wrong and dishonest.

As I said in one of my earlier blogs, I have watched first one then another of our Federal Foreign Affairs Ministers go around our Asia Pacific neighbours and preach on the need for honest and transparent government for that country to be able to compete in the world economy. I keep thinking to myself, that we should get our own house in order and get rid of all hidden taxes and dishonest politicians before we start dictating to others!

I would end with two final observations.

1. While the transition of Fire Service Levy in Victoria is a complete mess, none of us should lose sight of the fact that at the end of the day the tax will come off and the cost of home and contents, commercial property, construction and business interruption insurance in this state will be considerably cheaper from 1 July 2013. Hallelujah!

2. I hope Mr Weller MLA and his Liberal and National Party colleagues obtain a Financial Services Services Licence before he gives much more advice on insurance. Yes you may find cheaper insurance but will it have the same coverage, the same claims service and or will the insurer have the same credit rating. Insurance is not about price it is about protection and the sooner those in Spring Street understand that they should be encouraging home and business owners to protect themselves with full and adequate insurance the better.

Australia, our opening hours are from Monday to Friday from 8:30 am to 5:30 pm (AEST) excluding public holidays.

Australia, Our opening hours are from Monday to Friday from 8:30 am to 5:30 pm (AEST) excluding public holidays.

Australia, our opening hours are from Monday to Friday from 8:30 am to 5:30 pm (AEST) excluding public holidays.

New Zealand, our opening hours are from Monday to Friday from 8:00 am to 4:30 pm (NZST) excluding public holidays.

New Zealand, our opening hours are from Monday to Friday from 8:00 am to 4:30 pm (NZST) excluding public holidays.

Our opening hours are from Monday to Friday from 8:30 am to 5:30 pm (GMT+10) excluding Australian public holidays.

Our opening hours are from Monday to Friday from 8:30 am to 5:30 pm (GMT+10) excluding Australian public holidays.